The Worst Movie I’ve Ever Seen 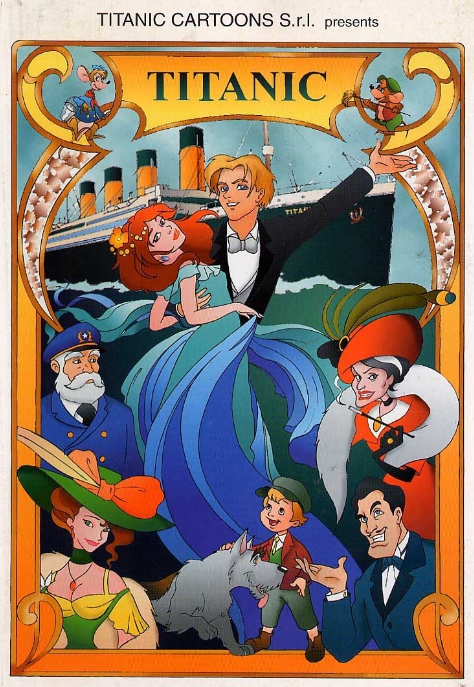 I’ve seen just about every Titanic movie and documentary that has been released. Since I was a little kid, I always had a strong admiration for the sunken ship. I always enjoyed researching and learning new facts about the Titanic. I still own a lot of the books I read as a kid and I also have the 1997 movie, Titanic, on DVD. It is one of my favorite movies. Unfortunately, following some great movies is a bad spinoff movie. This the case with Titanic: The Legend Goes On. I watched the movie multiple times, so you don’t have to!

At first, the movie starts off with the Titanic sinking. This is a very rough start for what is supposed to be a children’s movie. I genuinely don’t believe this should be a children’s movie since it’s a little traumatizing. It turns out that this scene is actually a spoiler. The movie actually starts with four characters in a train car heading to the port to enter the Titanic. The four characters are:

Angelica has lost her parents and is trying to find them in New York. Angelica serves as her step-family’s servant/maid. They board the Titanic and even though her step family is very wealthy she stays in the 3rd class and gets called up to do her step-family’s room keeping and gets blamed for things that she did not do (ex: Breaking a cup she did not touch)

While boarding the ship, some random guy who is never made made a very weird opening line, “let’s hope it’s a smooth crossing” Like did he know it was going to sink? What is the lore behind this.

This movie has a lot of different subplots all happening at once. While all of this is happening, there is a mouse family (Maxie and his parents) where all the cargo gets stored. The Pickering’s family cat, Geoffrey (who is only seen once prior to the train), makes an effort to eat Maxie, but he gets saved by one of the dogs on the ship, Fritz. Maxie thanks Fritz for saving his life and instantly starts rapping about it being “Party Time ”. This scene goes on for a few minutes and is somewhat creepy. Continuing with the weird subplots, there is a detective on the boat because he thinks there’s a crime on the ship. What’s the crime? He doesn’t know. He said it will “come to him”. Luckily for him, there is a crime. There’s are two thieves on board, who try robbing wealthy passengers Kirk and Dirk, the nephews of a wealthy passenger, Corynthia Meanstreak (another antagonist). Because this movie does a bad job at introducing characters, I thought she and Angelica’s step-mother were the same person. They look very similar. Another character introduced in the weirdest time possible is Angelica’s love interest, William. They meet when Angelica is bringing back her step-family’s laundry. When they bump into each other, in true love-at-first-sight fashion, Angelica drops the laundry basket and William helps her put everything back inside the basket. He picks up one of her step sister’s dresses and says “I’m sure you’d look ravishing in this”. Lil creepy man. Angelica returns her step-family’s laundry and William goes back in his room to tell his nanny all about Angelica.

Pretty accurate from the actual movie. He gets told that she (Angelica) should bump into William again because there is nowhere to go since they’re in the middle of the ocean. Later that night Angelica is out on the stern of the ship admiring the night sky, she sees William approaching her. She asks him why he’s not inside. He tells her he met a beautiful girl and “cannot let her go”. They weirdly start dancing and mid conversation she leaves again. They meet again and William tells her, “we’ll move to America and get married and look for your parents” as if the viewer didn’t remember the original plot of this movie. Then the ship hits a iceberg, there’s chaos and Angelica is able to get onto a lifeboat and watch the ship sink. Which is probably longer than it should be with a lot of reused scenes. Angelica’s life boat looks for William, they think they find the right person but it’s one of the workers. They leave him on a piece of ship in the ocean and still look for William. They find him and bring him on the boat and they kiss. Just as the movie is about to end we get disrupted by the talking mouse, Maxie. He goes on to say where everyone is now so, no one died? The end

“Titanic: The Legend Goes On” was one rollercoaster of a film. The original movie was released in Italian and voiced over in English which is why some of the English is very shaky, along with their English voice actors.

Maxie after being saved: “If it wasn’t for you, I would have been in someone else’s digestive system.”

Gertrude yelling at Angelica: “Pick up those bits of broken china at once!”

Corynthia yelling at Kirk and Dirk:” Hurry up you layabouts!”

I honestly don’t know what Corynthia was saying from how she yelled it so I just did the best I could.

As a Titanic lover I can say this is one bad movie from the many I’ve seen, I’ve been a bit tempted to rewrite the script, but for now I’ll stick to the James Cameron version.