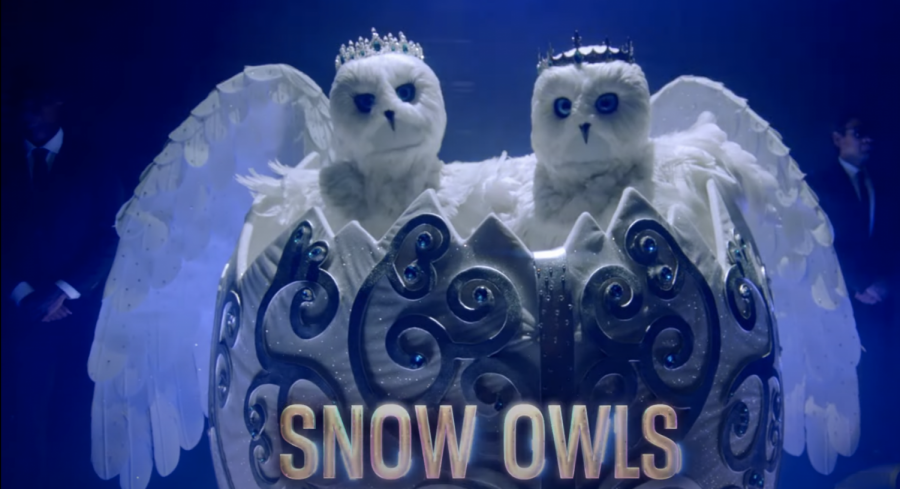 Wow. This week’s episode of The Masked Singer was not to be missed. This latest episode featured the Group A finals. The finalists of this group consisted of The Sun, The Snow Owls, and The Popcorn. Warning: MAJOR SPOILER ALERTS AHEAD! I’ll recap the performances, the panelists, and my guesses of whose celebrity faces are under the masks. If you don’t want any surprises ruined, watch the episode before reading…

Let’s start with the first performance: The Sun. Sun sang “A Piece Of My Heart” by Janis Joplin and she killed it. Sun’s vocal range is awe-inspiring and it sounded quite familiar to me. The clues detective, Jenny McCarthy Walberg, had an interesting guess for this performer: she believes Sun is Demi Lovato. She said that based on the clue package there was a Jock Rock clue, and she interpreted that as Lovato’s performance at the Super Bowl. Robin Thicke agreed with Jenny. Guest panelist Niecy Nash said that Jenny’s guess “was stretched like gum on an old shoe.” This commentary alone cemented her in my guest judge hall of fame list. Niecy Nash’s believed American singer and songwriter Jewel was under the mask. Dr. Ken Jeong (the infamous wrong guesser) thinks that the Sun is Katherine McPhee based on a clue showing Alaska, knowing that McPhee visited Alaska. My guess for The Sun is a little far fetched: Katy Perry. I picked up on clues from the clue package saying that Sun has not been able to perform and entertain in months. The clue did not specify that the restriction was from COVID-19, and we all know that Perry was pregnant with her first child over the last few months. There was also another clue about traveling Boston, Alaska, and Mexico, and supposedly, Perry went on trips to all of those places. The clue that made me certain was that Sun has songs that have topped charts. Perry has made gold and platinum history with her record-breaking songs “Roar”, “Firework” and “California Gurls” (Also was I the only one who was today years old when I learned that the song is spelled “Gurls” and not “Girls”?!)

Moving on to the next performance: Snow Owls. This dynamic duo sang “The Prayer” by Andrea Bocelli and Celine Dion. Snow Owls have had me stuck since the first performance. Niecy Nash came out with the guess of Brad and Kimberly Paisley. Brad Paisley is one of the most legendary country singers ever. That guess made sense to me based on the voice but not the clues. Robin’s guess was Amy and Vince Gill because of a clue that said empty nest, and these two have 2 kids that both moved out of their house. Ken had a not-so-crazy guess of Danny DeVito and Rhea Perlman. He came to this conclusion based on a clue referring to Cheers, because they were on the show Cheers, serving customers together. I believe these 2 are Chip and Joanna Gaines of HGTV’s Fixer Upper. It is probably one of the worst guesses ever from this show (it’s a good thing I’m not on the show). I think this only because there was a clue from their first clue package that said Magnolia, which is the name of their farm, bakery, and restaurant. The voice had me totally stumped because I have never heard either of them sing before.

The next singer was The Popcorn. Popcorn is such a good performer with an amazing range and a confident stage presence. She chose to sing “Domino” by Jessie J. I thought the voice sounded very familiar. It was only when Niecy said Cindy Lauper that I knew she had to be right. I had to listen to the 1980’s hit “Girls Just Want To Have Fun” to be sure, but now I am. Niecy came up with the idea based on clues referring to New York, as Lauper is sometimes considered the “Queen Of New York.” At first, I might have thought it was Lady Gaga but we don’t need to bring that up. Jenny picked up on a clue of a crimping iron, and she thought of someone who has crimped hair: Taylor Dayne. Ken went in a very different direction. There was a clue talking about Popcorn being friends with Bee from Season 1. The Bee achieved 3rd place in Season 1 and turned out to be Gladys Knight. Ken was the only panelist who believed that Bee was Anita Baker instead of the rest of the panel, guessing Gladys Knight. He doubled down on Anita Baker, the “queen of R&B.”

The panel and studio audience voted on The Sun to move on to the Super Six, which is the final two performers from each Group A, B, and C. This meant that Popcorn and Snow Owls had to compete in “The Smackdown” to fight for their spot in the Super Six. Snow Owls kept their slow, soulful theme with this performance and sang “Before You Loved Me” by Celine Dion. I hate to say this, but it was not their best performance. The thing that I did like about it was I got to hear the male owl’s voice and it sounded very familiar to me. I thought of maybe Luke Combs, but couldn’t come up with a female companion for him. Popcorn came out strong singing “(Everything I Do) I Do It For You” by Bryan Adams. The voice reminded me of Lady Gaga even more, but I still chose to believe it was Katy Perry. Unfortunately, Snow Owls didn’t win “The Smackdown”. That meant that they had to “Take It Off!”

The panelists final guesses were pretty good. Jenny stood with her guess of Amy Grant and Vince Gill. Niecy changed her guess to Harry Hamlin and Lisa Rinna. And Nicole, nicknamed “Sherlock Schery” (because of her history of being able to identify celebrity voices or get very close), came up with Clint Black and Lisa Hartman. This unmasking was a big deal because it was the first double unmasking ever on the show. These amazing singers turned out to be Sherlock Scherzy’s guess, Clint Black and Lisa Hartman. Sherlock Scherzy is living up to her name.

Well, this week was a roller coaster of guesses, but more is to come next week for the Group B finals, and it’s going to be even harder to identify these celebrities under the mask.